The Japan Geoscience Union (JpGU) and the American Geophysical Union (AGU) are pleased to announce that as a part of our partnership, we are moving forward with an exciting multi-year meeting collaboration.
Beginning in 2016, AGU and JpGU will hold jointly sponsored sessions at each society’s meeting.  Session proposals for the jointly sponsored sessions at the JpGU 2016 meeting will be accepted beginning 1 September 2015.  For ease of submission, in instances where AGU and JpGU colleagues are collaborating on a session proposal, we suggest that the JpGU member should submit the proposals via the JpGU website.  When abstract submission begins in January 2016, both AGU and JpGU members will be able to submit abstracts.
In May 2017, JpGU and AGU will hold the first joint meeting of the two societies covering all areas of the Earth and space sciences as well as many sessions for inter- and trans-disciplinary scientists.  The meeting will be in Japan, and is forecast to have 7,000-9,000 scientists from around the globe.  Student travel funding will be available for these meetings.

The University of Tokyo

As I am sure you all remember, during the JpGU Meeting 2015, we held a symposium called “Geoscience Ahead” as part of the celebration to mark the tenth anniversary of the founding of the JpGU.  During this symposium, the four presidents of the AGU, the EGU, the AOGS and the JpGU made an announcement about furthering international cooperation in the geoscience community.  As part of this cooperation, our 2017 meeting will be held as a joint meeting with the AGU, and in preparation for this, the 2016 meeting will feature about twenty joint sessions to be held together with the AGU.  These joint sessions are a test case for the continuing internationalization of the JpGU, and as such, I am very keen to make sure that they be successful.  2016 will surely be remembered as an important year in this internationalization process.

It goes without mentioning that we welcome interesting session proposals and are looking forward to receiving manuscripts for both our usual sessions and our international sessions including the joint sessions with the AGU.  I would like to ask everyone for their help and cooperation to make the JpGU Meeting 2016 a huge success and thank everyone in advance for all the hard work to come.

I am Tadao Nishiyama, chairman of the JpGU Meeting 2016 Program Committee.  For the first time we are planning to include joint sessions formally with AGU in the 2016 meeting.  Preparation for the meeting is now moving forward with support of the director of JpGU Meeting Toshiyuki Hibiya, JpGU Taskforce for 2017 Meeting Chair Kiyoshi Suyehiro and JpGU Meeting Organizing Committee Chair Yozo Hamano.  In 2017 we intend to further increase cooperation with the AGU to hold the 2017 meeting as a joint meeting with the AGU: the 2016 meeting will serve to prepare for this joint meeting.  Because of this the management and operation of the 2016 meeting will necessarily be a little different to previous meetings.  One difference is that the increased number of both participants and sessions will mean that there will be insufficient space to hold the meeting in its current form.  To solve this problem we intend to increase the percentage of poster sessions so that the number of poster sessions and oral sessions are approximately the same, and we will secure a large space for the poster sessions.  We fear that this might increase the burden for conveners to organize their programs: we ask for your cooperation with the new arrangements.  A further difference is that whilst last year’s meeting included 55 international sessions the 2016 will include an additional 10 to 15 joint sessions with AGU.  In order to help participants from outside Japan we would like to ask all speakers in the Japanese language sessions to make every effort to prepare as much of their written material as possible in both English and Japanese.  With a meeting as large as JpGU it is almost impossible to comply with the requests of every participant, and every year we leave more than a few people unhappy.  We are well aware of this and, whilst I cannot promise to please everyone next year, we shall be doing our best to improve the meeting for all the participants: I would like to seek your understanding and your cooperation with our efforts.  Thank you. 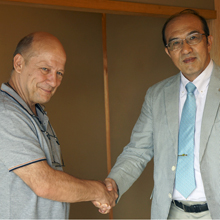 Reinforcing the memorandum signed to establish a strong partnership between the two unions, the Japan Geoscience Union and the American Geophysical Union have committed to collaborating on two upcoming meetings in 2016 and 2017: joint sessions during both organization’s annual meetings in 2016, and a joint meeting in 2017.

Then joint unions sessions at both the JpGU Annual Meeting and the AGU Fall Meeting will take the form of a Great Debate, a format we recently implemented at AGU’s 2014 Fall Meeting, and which aligns well with both Union’s missions and goals. The format of this special union session is built through a panel composed of scientists and non-scientists, with different agendas and origins, broadly addressing a topic related to geosciences. After each panelist gives a short, introductory presentation, they will then reply questions prepared by the conveners for the first part of the session. During the second part of the session, members of the audience will have the opportunity to ask questions of each panelist. The session will close with each panelist offering brief, closing remarks.


For the 2016 meetings, the selected topic will be ”Geosciences and society: What is the role of geoscientists? Do we really need geoscientists? And if so how to suggest vocations among the young generations?" We anticipate that these special sessions will be particularly stimulating, as they will provide useful comparisons of a single situation in two countries with different educational and societal contexts.

We look forward to seeing you attending this session at JpGU 2016 in Chiba.